Heathrow celebrates ‘the best Christmas gift of all’

For the first time, Heathrow is launching a video campaign at Christmas celebrating 'the best gift of all'.

The poignant film reminds us that coming home for Christmas is the best gift you can give at this special time of year.

The ad follows two much-loved and ageing teddy bears as they land at Heathrow. It captures tender moments between the couple; from the wife gently waking her sleeping husband in his seat, to his protective arm helping her onto the escalator.

As they travel through the airport, the film - set to a classic Chas and Dave soundtrack - captures all the familiar sights and sounds of the UK’s hub airport. Finally the elderly bears emerge blinking into arrivals and we see them searching the crowds for someone. We won't spoil the ending for you.

It's the next phase of Heathrow's brand campaign designed to mark its 70th anniversary and follows Heathrow's First Flight that was launched to critical acclaim earlier this summer.

Heathrow’s Commercial Director Jonathan Coen said: ‘Christmas is my favourite time of year at Heathrow – the airport is abuzz with families and friends reuniting for this special time of year. We feel the bears’ journey through the airport at Christmas beautifully captures the emotion of walking through Heathrow arrivals into the arms of your loved ones.’

The campaign has been created by advertising agency Havas, with film direction by DOM&NIC through Outsider Productions and animation from The Mill. The piece was filmed over three days while Heathrow was fully operational with location management team, Salt overcoming the complex logistical challenges of filming across multiple terminals, on the airfield and in restricted locations to make the campaign a reality.

The film will be launched on YouTube, cinema and social channels on 14th of November. 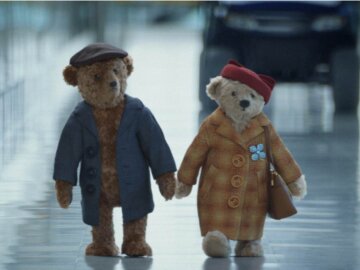