1 October 2018: Creative agency Havas London has unveiled its first work for The Department for Education (DfE) since winning its teacher recruitment business in May. The campaign highlights that teaching isn’t about what young people become, but who they become – and underscores the unparalleled role teachers play in shaping young people’s lives.

Every Lesson Shapes a Life is scheduled to break on TV during Coronation Street at 20:45hrs tonight (Monday 1 October) with a 60’ edit, which will also appear in cinema during October. A 30’ edit will also air on TV and video on demand through to 6 November.

The campaign will also appear across social – with additional films featuring real people telling their stories of teachers who have shaped their lives – radio, digital, email DM, physical collateral and event branding and an upcoming press and out-of-home campaign. The entire campaign has been turned around in just four months to coincide with the start of a new recruitment year and applications for teacher training opening on 9 October.

It also introduces a new brand identity, devised by Havas, comprising new colours, logos, fonts, imagery and the strapline Every Lesson Shapes a Life. This will be implemented across all of the DfE’s teacher recruitment touchpoints including the Get Into Teaching website, Train to Teach events, graduate fairs and locally-adaptable assets for schools.

The emotive film, shot by Pulse Films’ thirtytwo, follows the journey of a young girl named Abi, from her very first day of school as a nervous, wide-eyed four-year-old, through to her last, leaving at 18 with the confidence to discover her place in the world.

An authentic portrayal of the ups and downs of school life and growing up, it highlights the fundamental role teachers play in shaping their students’ lives. As well as Abi, who is played over the years from girl to young adult by four actors, the film features a cast of real teachers.

Chloe Saklow, Deputy Director, Teacher Recruitment and Conversion at the DfE, says: “By focusing on one girl’s story, we wanted to vividly demonstrate the unrivalled and positive human impact teachers have on the many children whose lives they touch. Teaching, like many other careers, isn’t without its challenges, but I can’t think of many others that are as important, or rewarding.”

Jen Black, Managing Partner at Havas London, adds: “For this campaign, authenticity was key. We wanted to capture the years of care, patience, encouragement and support that teachers invest into the children whose lives they shape. That’s something we could only accurately portray through using real teachers, whose buy-in was so important. They’re unsung heroes, and we’re so proud to be working on a campaign that has the chance to help change lives for the better.”

Havas London was appointed on a three-year basis by the DfE in May, following a competitive process, to ensure that teaching as a career remains attractive and at the forefront of minds, at a time when competition for graduates has intensified. 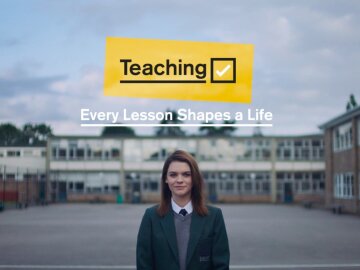 Every Lesson Shapes a Life