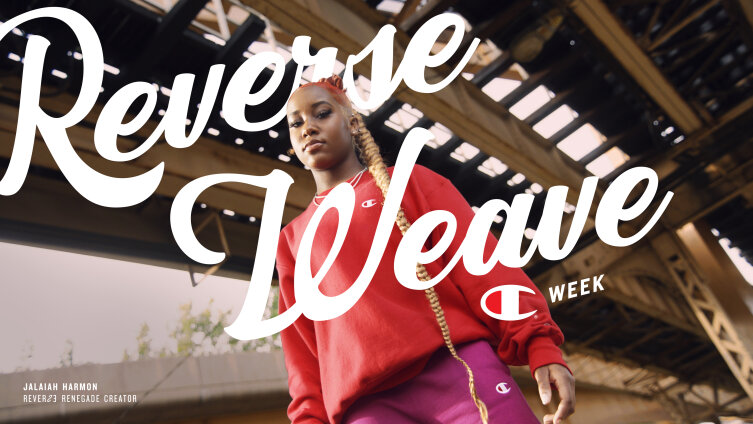 
Today, October 13th, Champion Athleticwear announces that it will be celebrating their franchise with the first ever Reverse Weave Week! The week, full of giveaways and collabs, will run through October 19th to acknowledge the anniversary of their most iconic patent – the Reverse Weave – which was finalized on October 14th, 1952.

Reverse Weave Week was created to recognize one of the most famous fashion items that has not gotten the attention it deserves. In 2017, the Reverse Weave was included in the MoMA’s “Is Fashion Modern” exhibit as one of the 111 items that have shaped the history of fashion. Today, you see Reverse Weave on just about every celebrity and consumer of the past couple generations. Champion is now reversing everything, to celebrate the brand properly.

As an extension of reversing things, Champion has teamed up with the creator of the famous “Renegade” TikTok dance, Jalaiah Harmon, to create a “reversed” version of the viral sensation. The 14-year-old famously did not receive proper credit for the dance’s creation, and Champion is out to reverse that too. Participants who take on Jalaiah’s TikTok #ReverseRenegade will be entered for a chance to win a Reverse Reverse Weave. This limited run of 52 Champion Reverse Weave hoodies will have, for the first time ever, reversed Champion branding.

A series of videos, in line with the brand’s “Be Your Own Champion” messaging, were also created and produced in reverse for the campaign. The campaign is by creative advertising agency Energy BBDO. You can watch the :30 and :15 videos, which will run on social media platforms throughout the week, here.

The Reverse Weave came to fruition on football fields in the 1930’s, when Champion supplied teams with uniforms. At the time, coaches raised concerns about shrinkage when washing big batches of athletic wear. Champion listened, decided to stitch athletic gear horizontally instead of vertically to help the uniforms last longer, and the Reverse Weave was born.

“The Reverse Weave is Champion's original heavyweight icon with over 80 years of sports heritage. This campaign is about recognizing the undisputed Champion of Hoodies, Crews, and Joggers,” said John Shumate, VP Global Brand Marketing of Champion.

“The Reverse Weave is a fashion legend -- it's in the MoMA but no one knows its name. Jalaiah Harmon invented the most famous dance on TikTok but no one knew her name initially. This work is about reversing time -- and giving recognition to two icons that deserved proper credit from the start,” said Robin Laurens, Executive Creative Director at Energy BBDO.

Westfield Kickstarts The Magic of Christmas

The One Club Announces Diverse Juries For The One Show 2022

FAVEEO TAPS FORMER CEOS OF OGILVY, HAVAS MEDIA GROUP AND CURRENT TRIPLELIFT CMO AS INAUGURAL ADVISORS
Want to make your company shine?
Showcase Your Work
Add up to 4 pieces of creative work to your company profile.
Boost Your Visibility
Appear above the rest when global brands search for you.
Encourage Direct Contact
Make it easier for clients to reach you by having the right people listed in your profile.
» Switch to a Starter Profile
Start now Daha fazla bilgi için
Otherwise keep editing your FREE page
Any questions?